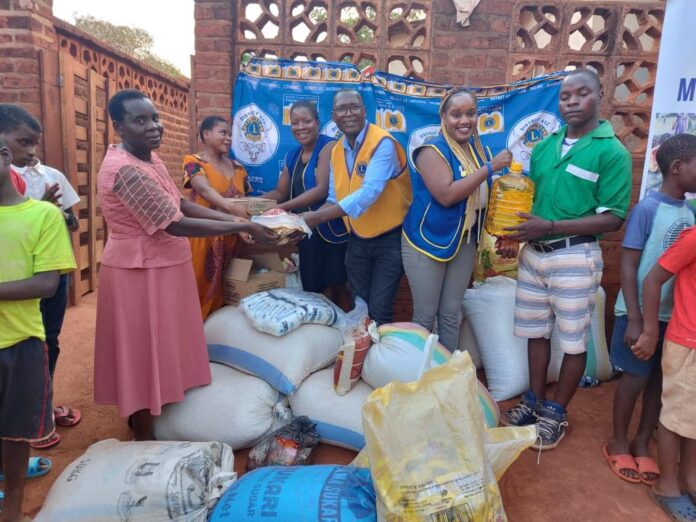 Lions Donates to School for the Blind

Lions Club of Mtunthama and Lions Club of Capital City have donated assorted items to Malingunde School for the blind to assist them with various needs they lack.

The two clubs donated 12 bags of maize, 4bags of soya pieces, soap for washing, rice among others things recently in Lilongwe.

President of Mtunthama Lions Club, Veronica Ndalama said the donation has been made towards Malingunde School for the blind because the month of October is where they commemorate sight which is amongst the Lions five pillars.

“We came here to cheer learners at Malingunde School for the blind who have visual impairments knowing the challenges that they face due to their impairment.

“We understand that these children come from different backgrounds some from very poor families and all being at one place they need support,” she said.

She added that as Lions they work in five main pillars among them being sight and hunger and their visit to Malingunde was also one way of fulfilling their obligation in these pillars.

Deputy Head teacher for Malingunde Primary School Cecilia Kalilangwe said the food items that have been donated will go way in assisting the children at the school.

“We have a lot of challenges at this school because we have children from different backgrounds for example those children whose parents were locking them inside the house and everything that is needed for them we provide.

“Additionally most children that are here are those that come from the rural areas and their parents send them to school without anything, like body lotion, soap and we have those that come with one pair of trousers,” she said.

She said when well wishers like Lions Club donate they are able to top up from the little they have such as soap, food.

“There are times we receive donations like clothes some of these children go back home their  parents  take the clothes away  from them and when they are back its like we start over again so these kind of donation helps a lot,” she said.

She said they get a funding of K292 916 a month which is used to take care of the children and said the money is not enough.

Further she said the learning materials for the students are very expensive as such it is hard expensive making it harder for the school.

Malingunde School for the blind was established in 1971 and currently it has 46 learners who are boarding at the school.-(By Ireen Kayira, Contributor)