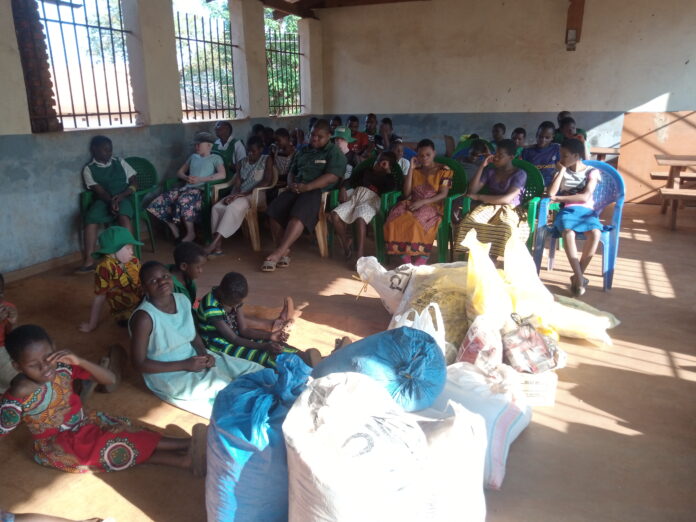 Malingunde School for the blind has asked for a fence around the school to protect children boarding at the school who are constantly having security problems from outsiders.

This plea was made when Lions Club of Mtunthama and Lions Club of Capital City made a donation of food items to the school recently in Lilongwe.

Deputy Head Teacher for the school Cecelia Kalilangwe said they would have loved if the issue of fence was done because a lot of people have promised but to no avail.

She said protection of the children will be easy once the fence since apart from the children who are blind they also have children with albinism and they feel that are at a greater risk as far as security is concerned.

“Previously one child with albinism was almost kidnapped fortunately enough one of the teachers saw her following a stranger and was told to go back.

“We have three children with albinism who are together with their friends and we feel like the fence will provide the much needed protection,” she said.

She added that without a fence thieves easily break in and steal things from the children.

“To children who are not able to see, they only hear footsteps and assume it is a friend only to realise that it was a thief.

Mtunthama Lions Club President Veronica Ndalama said they will go back to their club to see how best they can come up with the fundraising activity that will make sure they find funds to address the problem.

“We will also work together with other clubs to raise these funds and we believe a joint collaboration goes a longer way and has a bigger impact than one club as you have seen today we made a donation with Capital City Lions.

Capital City Lions President Nsimbeni Chirwa said apart from the discussing it with other clubs they will also make sure they involve the community in mobilising resources.

“We will engage the Traditional Authority, the Member of Parliament for this area to see how best we can work together on this as well as sourcing funds from other corners,” she said.

She acknowledged that it is big problem considering that the children have visual impairments as such their security matters most.

The two clubs donated 12 bags of maize, 4bags of soya pieces, soap for washing, rice among others things.

Malingunde School for the blind was established in 1971 and currently it has 46 learners who are boarding at the school.-(By Ireen Kayira, Contributor)