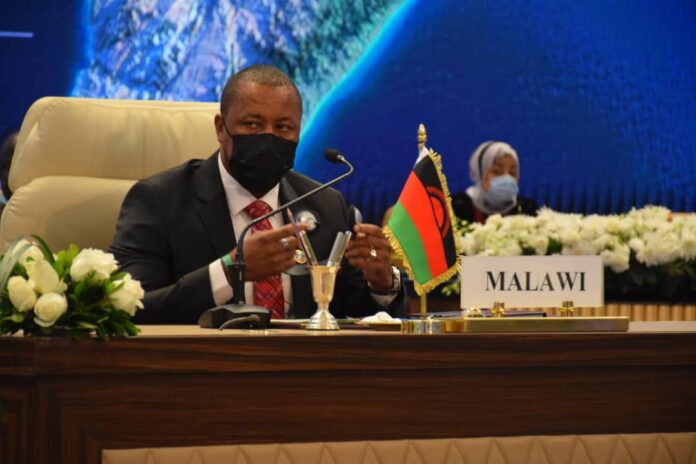 CHILIMA, CHAKWERA AGREED ONE TERM EACH 

Malawi’s Vice President Dr. Saulos Chilima has disclosed that he and President Lazarus Chakwera signed a 10-year-agreement where each will rule the country for one term only.

Speaking during a press briefing on Friday at UTM headquarters in Area 10 in Lilongwe, Chilima disclosed that contents of the agreement are that President Chakwera would not be presidential candidate beyond 2025 but cede the mantle to the running mate to become candidate.

The veep Dr. Chilima said the agreement is binding and any departure from it amounts to political fraud.

“Beyond this, I would like to state that the Agreement was signed for a period of 10 years in which both Dr Chakwera and I would support one another to lead for one term.

“Any departure from the Agreement amounts to political fraud not only on the parties to the Agreement, but also on the popular will that mandated the Alliance in the first place,” Chilima stressed.

The Veep reprimanded those with political ambitions, saying their personal interests and ambitions should not paralyze the entire country.

“There is no wisdom in name calling, abuse, arrogance, humiliation or indeed violence for something that came into being amid smiles and a sense of hope for many generations” he lamented.

He said he is flabbergasted that power which was supposed to be shared under the Tonse Alliance has become sweet to some in MCP who are fueling political fights.

“If there is insistence from other elements within the Alliance and their advocacy for a split as we move towards 2025, the best would be to terminate the Alliance now.

“Of course the instigation and termination of the Alliance by all parties now would also amount to cheating on the popular will of the people of Malawi that mandated the Alliance to form Government,” he emphasized.

He said if others insist that there should be departure from the agreement then the alliance should be terminated now and call for fresh elections to seek fresh mandate.

“Indeed, if we were to terminate the Alliance, in honesty we would have to call for a fresh presidential election. We should not continue our journey to 2025 with two hearts: One inside and another outside of the Alliance,” he stressed.

On Tonse alliance; Chilima said Tonse partners contributed to have the Alliance win the election in the 2020 fresh polls through prayers, food, time and even money.

He thanked Chikosa Silungwe, Prince Kapondamgaga, Titus Mvalo and others for helping during the Tonse agreement.

In the Agreement they also agreed to promote national unity, good governance, no discrimination, mutual trust, mutual respect, integrity, and work for the interests of Malawians, among others.

“I would like to take this opportunity to assure you all that the commitment we made to be your servants remains intact. No amount of propaganda, innuendo, insult, humiliation will move us an inch. We as the UTM, are a big part of this Administration and no one must be under any illusion to believe otherwise,” he said.

He reminded Tonse alliance members that it was counterproductive to engage in political campaigns and fights three years away from another election.

“I wish to remind members of the Tonse Alliance that we NEVER at any stage promised Malawians another campaign, we promised them the Land of Canaan. And our mission should, therefore, solely be to get them there.

“If, for whatever reason, our mission is challenged, we should own up and re-engage the people of Malawi and explain why the course must change. Another campaign, 3 years away from an election, is most unfortunate, regrettable, abuse of the political process, and completely unnecessary,” he emphatically said.

The Veep disclosed that the Tonse agreement was signed on good faith and to promote transparency, mutual trust and respect among partners, national interest, and that there would always be consultations and consensus where UTM and MCP are equal partners.