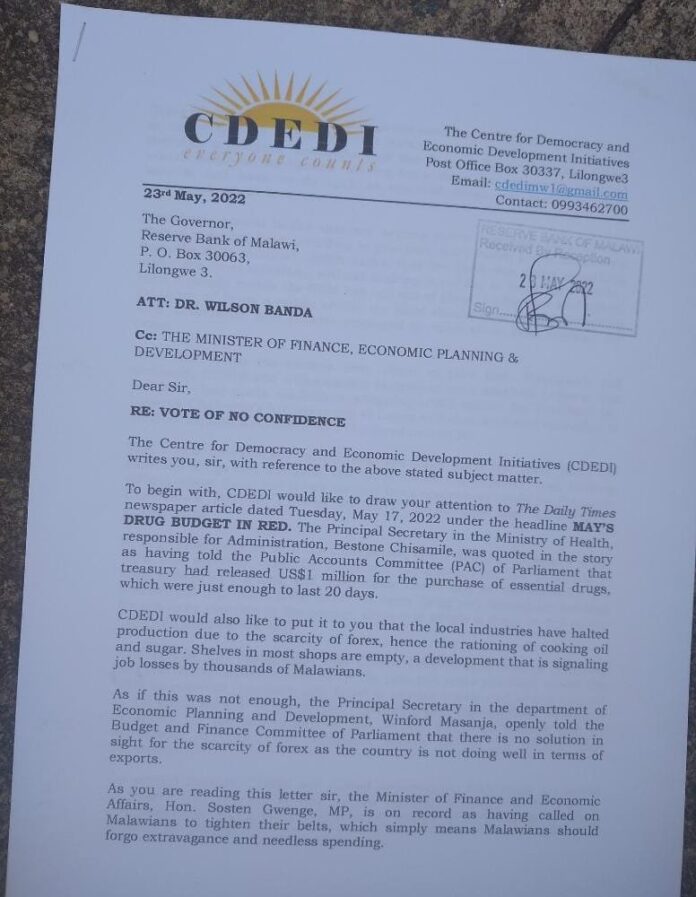 The Centre for Democracy and Economic Development Initiatives (CDEDI) has expressed worry over indecisiveness of the country’s central bank under the leadership of Governor Wilson Banda.

In a letter to Banda CDEDI observes that RBM has run out of ideas, under his leadership and that in the interest of transparency and accountability, the noble thing the Central Bank Chief can do, is to resign on grounds that he has dragged the RBM into disrepute.

Alternatively, RBM Chief has been given a chance to exonerate himself, by publicly explaining to the Malawian taxpayers on why they should continue paying him as the RMB governor, when the writing is on the wall that he has failed to perform, and miserably so.

“By virtue of being a public entity, the RBM should have been forthcoming with information and policies employed to solve or at least manage the crisis. Elsewhere, central banks that are serving public interests, have already started rationing forex according to priorities. Back home, and if sentiments from the RBM publicist, Ralph Tseka, that the bank was doing something about the forex situation, without making it public, is anything to go by, then it simply means the RBM has run out of ideas,” reads the letter signed by CDEDI Executive Director Sylvester Namiwa.

All the pointers are indicating that things are not well enough and this has been expressed in the press with sources from the ministry of finance and economic affairs confirming negativity.

For instance, and even quoted by CDEDI in the letter, the RBM boss has been reminded by the remarks of the Principal Secretary in the department of Economic Planning and Development, Winford Masanja, who openly told the Budget and Finance Committee of Parliament that there is no solution in sight for the scarcity of forex as the country is not doing well in terms of exports.

As if that is not enough, Minister of Finance and Economic Affairs,  Sosten Gwenge, is on record as having called on Malawians to tighten their belts, which simply means Malawians should forgo extravagance and needless spending.

“Going by the aforementioned, it does not need one to become an economist to notice that all macro-economic indicators are heading south. It was therefore a foregone conclusion that the RBM would devise a mechanism to ring-fence forex for extremely essential services and basic needs such as essential drugs and medicines, fuel, cooking oil, wheat flour, etc,” reads the letter.

Further pointing the red flag is the recent confirmation by the Principal Secretary in the Ministry of Health, responsible for Administration, Bestone Chisamile, who told the Public Accounts Committee (PAC) of Parliament that treasury had released US$1 million for the purchase of essential drugs, which were just enough to last 20 days.

Surprisingly, according to Namiwa, at a time when the citizens were about to take Minister Gwengwe’s call seriously, CDEDI and well-meaning Malawians were shocked to learn that the bank had made available a whopping US$3 million for President Dr. Lazarus Chakwera’s luxurious trip to Davos in Switzerland and thereafter to Malabo, Equatorial Guinea, on a chartered private jet.

Namiwa is convinced that the RBM does not have forex for essential drugs and medicine, raw materials for industry, fuel, cooking oil and wheat flour, but it has stacked forex somewhere ready for President Chakwera’s and his Cabinet Ministers’ unjustifiable and unwarranted globetrotting.

He cautioned that such kind of approach, which unfortunately coming from the people who are perceived to be highly learned, will never bring any immediate solution for the forex shortage in the county, since it is simply a drain on the scarce forex and hard-earned tax.

“It is against this background that CDEDI believes that besides presiding over the steady depletion of forex for the past two years you have served the RBM as governor, you have also failed to provide timely and sound counsel to the executive arm of government, including your current boss, President Chakwera on the implications of the current economic outlook and its immediate, medium-, and long-term effects to the 18 million plus Malawians,” Namiwa narrates.

Adding that CDEDI and indeed well-meaning Malawians are forced to believe that RBM Governor is serving narrow partisan interests of the Malawi Congress Party (MCP), which is infamously known for its insensitivity to the plight of the people.

Namiwa feels Banda should have reasoned with President Chakwera not to travel, on grounds that the very same RBM which had failed to provide forex exceeding US$1 million to pharmaceutical companies to import drugs and medicines, could not afford to release US$3 million for the presidential trip.

“Simply put, the trip has been made extremely important than the lives of innocent and productive citizens, which have now been condemned to early graves due to preventable diseases. If this is not criminal negligence, then you are in a better position to tell us what this means. If you didn’t have somewhere to start from in terms of advising the president, you should have at least reminded him that just across the Songwe border, the late Tanzanian President John Pombe Magufuli managed to transform the face of his country within six years of his tenure, without attending any of such international conferences,” Namiwa hints.

He has even quoted Rwandan Paul Kagame who puts it that “where is the morality of sweeping the much-needed forex clean to finance a photo opportunity with founder and chief executive officer of the World Economic Forum when millions of the voters are at the verge of starving to death due to economic hardships?

RBM has confirmed receipt of the letter from CDEDI.

Some commentators have since faulted Chakwera’s trip to attend WEF since it is not beneficial to Malawians.