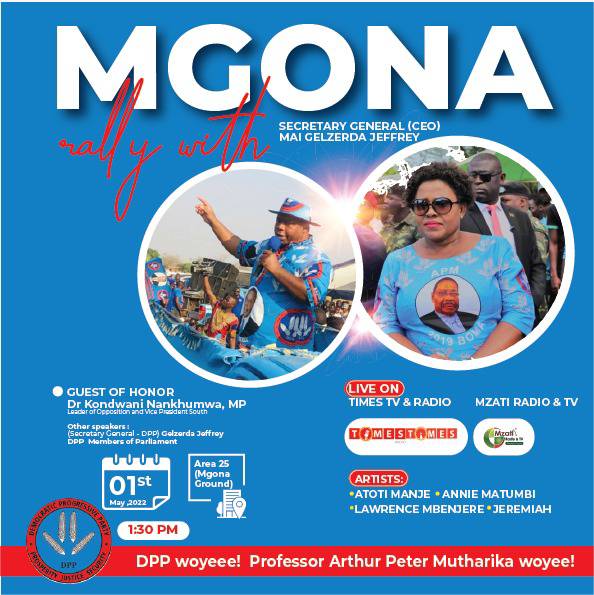 Over 50 Democratic Progressive Party (DPP) Members of Parliament (MPs) have thrown their support towards Kondwani Nankhumwa’s rally slated for this Sunday at Mgona Ground in Area 25, Lilongwe.

Malawi’s Leader of opposition in Parliament, Dr. Nankhumwa, who is also DPP Vice President for the South, will address a rally alongside DPP’s Secretary General Gledezer Jeffrey and other senior party officials from the Central Region.

The patriotic DPP members of parliament have thrown their support towards the crown puller Nankhumwa after some ‘misguided’ members of the party organize a counter rally to be held on Saturday in the same district.

First to announce their rally, scheduled for Mgona School Ground in Lilongwe, was the Nankhumwa side which is enjoying the support of DPP Secretary General Grezeldar Jeffrey.

Few days later, a rival camp which apparently is enjoying the support of DPP leader Peter Mutharika, announced their own on Saturday to be addressed by the party’s vice president for the central region Zeria Chakale.

Meanwhile, DPP’s General Secretary Wa Jeffrey has described the counter rally being organized by misguided DPP leaders on Saturday as a curtain raiser to their Sunday rally.

“As CEO of the party, I have organized this rally and invited Nankhumwa in his capacity as leader of opposition to be the guest of honour.

“As leader of opposition, Nankhumwa has no boundaries. The rally being slated for Saturday is a curtain raiser to our Sunday rally,” said Jeffrey.