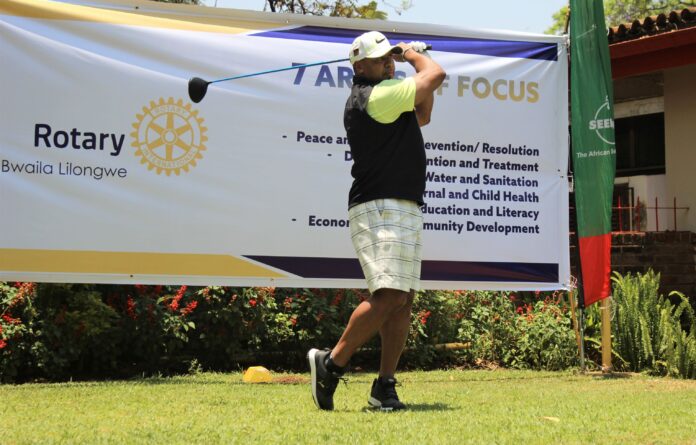 Vice President Dr. Saulos Chilima has appealed to all well-wishers in the country and beyond to support Rotary Club of Bwaila’s initiative aimed at raising funds for the procurement of dialysis machine, among other needs.

He made the call on Saturday at Lilongwe Golf Club where he participated in a charity golf tournament organized by the Club to raise K 10 million for the said charity.

The Vice President donated K1 million towards to cause, hailed the Rotary Club of Bwaila for the initiative and he appealed to the public to support the cause.

“I would like to join the Rotary Club of Bwaila to appeal for more support; let’s all do our part and donate towards the good cause because it could be you, it could be me, or it could be anybody who will need the dialysis machine,” Chilima stated.

He thanked the golf teams for showing up “in a scorching heat to play golf for a good cause.” the spirit the Vice President said should be emulated.

President for the Rotary Club of Bwaila, Dr. Richard Dilawo, described the charity tournament as a success saying they had achieved their goal by beating the targeted amount of K 10 million.

He hailed the Vice President’s participation saying it had drawn enough attention and pomp for the charity tournament.

“The tournament was very well patronized and we have hit out target,” Dilawo explained, adding that, “We planned to raise K 10 million but we have raised K 13 million and we are still raising the funds.”

According to the President, other than procuring dialysis machine and accessories for Kamuzu Central Hospital (KCH), the funds realized would be used to support the Kangaroo Ward at the referral hospital; and bursary for needy students struggling to finish college.

Lilongwe Golf Club Captain, Thomas Chafunya hailed the high participation of golfers in the tournament saying the players’ turnout had exceeded the expected number, leading to realization of the K 13 million.

According to Chafunya, who carried the day with a hole-in-one score for his team, 72 golf players were expected to participate in the tourney but 86 players turned up, making the event more successful.-( By Kondwani Magombo, Mana)