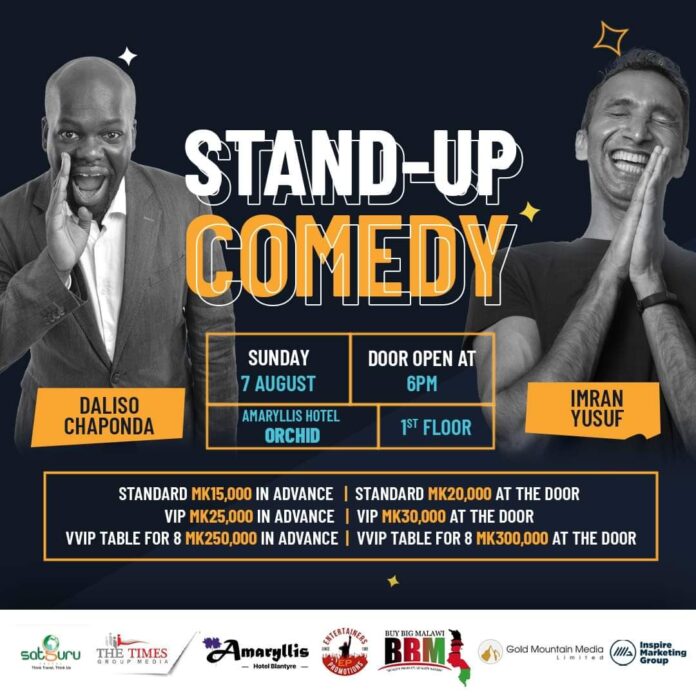 Celebrated UK based Malawian stand-up comedian Daliso Chaponda is set to perform at Amaryllis Hotel in Blantyre on Sunday as advance tickets are selling out as hot cakes in all designated outlets.

Daliso, who is a son to the former cabinet Minister George Chaponda, will perform alongside a Kenyan-born British stand-up comedian, who has appeared on various British radio and TV comedy shows, Imran Yusuf.

According to a poster advertising the show, advanced Standard tickets are going at MK15,000, VIP at MK25,000 while VIP table for eight people going at MK250,000.

The top Standup Comedian Chaponda has appeared in a number of shows and festivals around the world.

He performed three successful one hour, one man shows in the UK and Canada: Feed This Black Man – a show about the way the developed world sees Africa; Don’t Let Them Deport Me, a show about immigration and Westerners Calm Down, a show about the global financial crisis.

After 6 months of touring the South African comedy scene he moved to Manchester, England.

He regularly appears in comedy clubs and theatres across the UK. He is a versatile comedian and is best-known for his appearance on Britain’s Got Talent, where he reached the semi-finals and achieved third place.

He hasn’t looked back since and has gone on to build a worldwide comedy career which includes performances at the 3 biggest comedy festivals in the world – Melbourne, Edinburgh and Montreal.

In addition to standup comedy, Daliso is also a prolific fiction writer. He has published science fiction, murder mysteries and fantasy fiction in numerous magazines and anthologies. Recently, a play he co-wrote aired on BBC Radio 4.