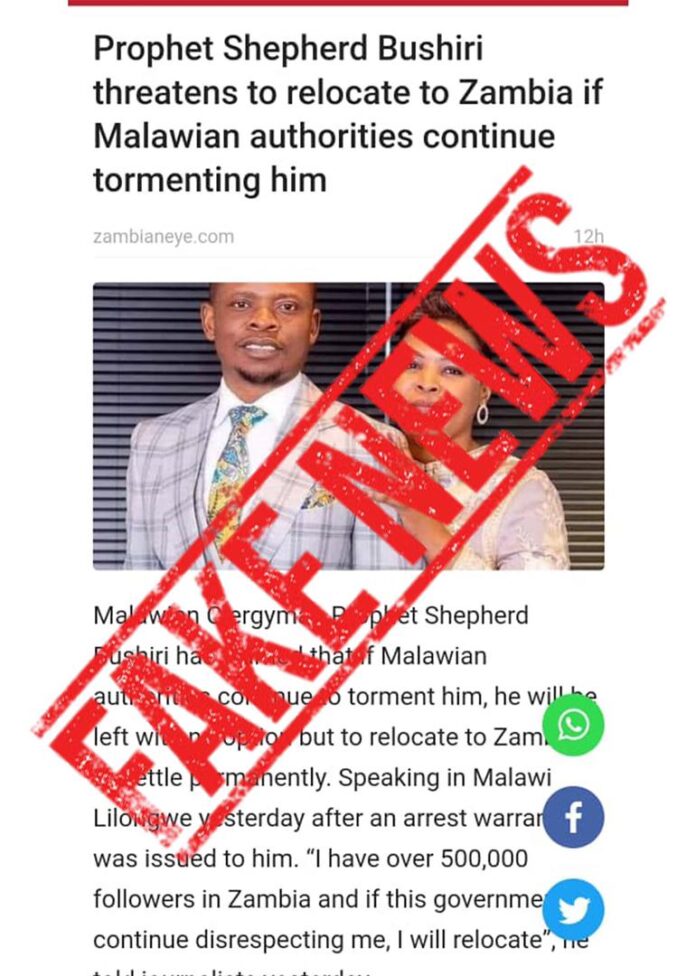 Malawian Prophet Shepherd Bushiri has dismissed social media reports claiming that he is planning to relocate to Zambia.

Prophet Bushiri, who is the founder of ECG THE JESUS NATION Church, dismissed the claims through a statement signed by his official spokesperson Ephraim Nyondo.

Here is the full statement

Prophet Shepherd Bushiri has taken note of several enquiries made to his office of public relations with regards to the malicious and disturbing article BELOW being shared on various social media platforms.

The article is entirely FAKE, every detail in it complete fabrication, and, if you chance it,  ignore and disregard as such.

Such articles, or any circulations such as those, are pitiful creations by ill minds who are always not happy with the positive contribution that Prophet Shepherd Bushiri is making not just to Malawi but also to the entire SADC region.

They always want to create bilateral tensions within SADC region pitching Prophet Bushiri as the cause.

We consider such acts as cowardly and they will never, at any point, divert the attention of  Prophet Bushiri from his God-given mission of building where there is destruction, of unifying where there are differences and of giving hope where there is pain and despair.

In his on-going response to disasters that hit much of the Southern Region, Prophet Bushiri has consistently hailed the support that he has been receiving from the Malawi government in ensuring the smooth distribution of relief items to the affected people.

Even the religious crusades that he has been holding, ones which attract tens of thousands of people into the country, Prophet Bushiri hasn’t shied away from commending the Malawi government for creating a conducive environment in which internationals can arrive in the country, worship freely and, also, tour the country with ease to appreciate its warmth and beauty.

Admittedly, Prophet Bushiri will never be involved in small talk that brings divisions; he will always be a cosmopolitan figure he has always been: a selfless and patriotic citizen who complements the efforts of the State in serving the Malawi nation.

To those fabricating fake stories against Prophet Bushiri, we urge you to stop these illegal activities because, beside being a man of God, the ECG leader is also a citizen, protected by the Constitution of Malawi.