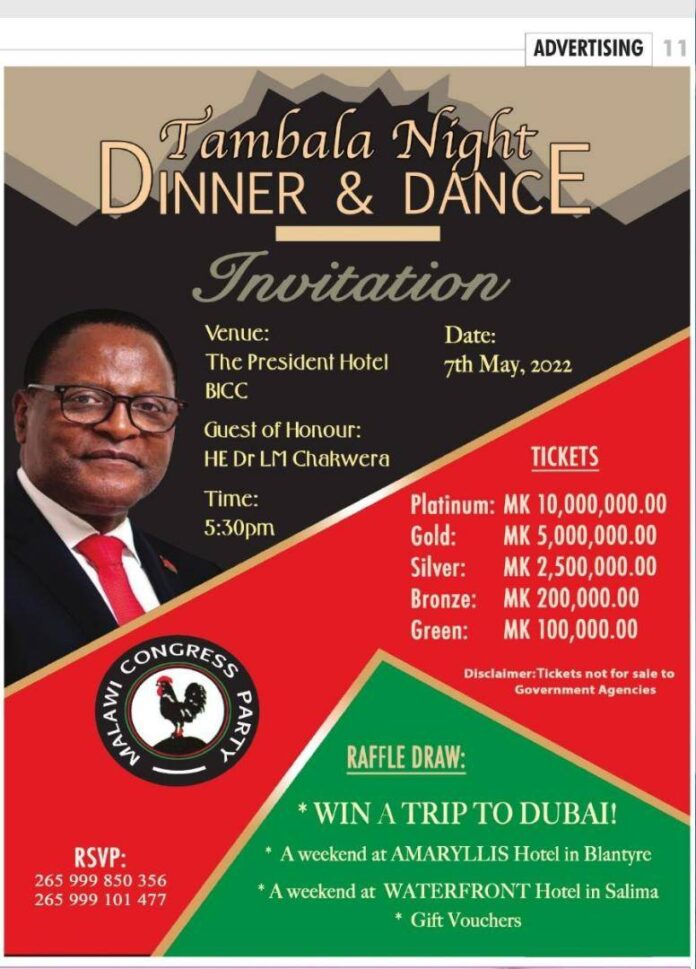 MCP to launder money at fundraiser

Grand scheme of things. Malawi Congress Party (MCP) has thought of a ‘clever way’ of money laundering by staging a fundraising event.

The party will hold a fundraising dinner on 6th May 2022 but little do Malawians know that it is a money laundering scheme.

Press adverts for the event have started fighting in the local newspapers indicating that those who will buy a platinum ticket will have to part with a whopping K10 million for a six hour event.

To fool the intelligence of Malawians, the party has put a disclaimer that tickets will not be for sale to government agencies.

“This is a great grand scheme of things. This is money laundering at its best. What is happening is that the people buying the platinum tickets have been given government contracts and businesses and in return they will be giving back to the party through the fundraising dinner, this is so pathetic, ” said one of the officials behind the concept.

“This was carefully thought by our strategists when they looked at how the other former ruling parties conducted these similar events. At first I thought this was the way to go until when they released the prices for the tickets,” said the member.

“The way things are now, who can part with K10 million for a six hour event without expecting anything in return? Only a fool I guess!”

“All those who have got contracts and businesses from government will be paying back MCP ‘cut’. Instead of paying the famous 10% cut at source, these people will pay the MCP through these dinner and dances,” added the member.

The story was corroborated by another senior member of the party who disclosed that people buying the tickets have already been identified and have already benefited from the party.

“You will see the people who will go there, they have already gotten their payments and this is paying the MCP for the support. Tell me if this is not money laundering, then what is it?” We are doomed as a country.”

“We hope we will know those who bought the K10 million tickets for the sake of transparency,” said the source.

The former ruling DPP is in court over similar events where state bodies were forced to buy tables for fundraising events.