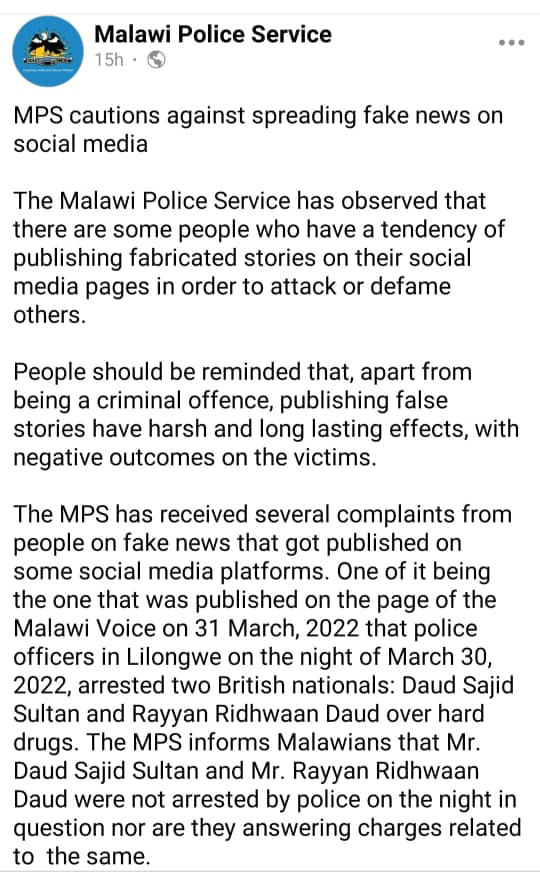 The Malawi Police Service (MPs) is under fire from members of the general public for threatening journalists and media houses which are deemed to be government critics.

This follows a statement issued by Deputy National Police Spokesperson, Harry Namwaza, on Tuesday evening, in which the police threatened to deal with Malawi Voice Publication and other media houses.

The Statement accused Malawi Voice of publishing a fake article that police had arrested two Indians for drug smuggling, a story which was not even published by the said publication.

According to Namwaza: “As people continue enjoying right to access to information, right to opinion, freedom of expression, among others, let them be reminded that enjoying one’s right should be accompanied with responsibility.”

Inside police sources told this publication that the law enforcers acted in this matter after being pressurized from the Indians businessman to clear image in their eyes.

James Affick said: “Police we love you only that Corruption is killing you professionalism….s­top bribing people so that we build the Trust we ought to have.

“Sometimes fake news comes when you cannot tell the nation what they want to hear from a particular matter hence, these speculations.”

Recently, the police also came under heavy fire after arresting Gregory Gondwe, a Malawian Investigative Journalist, who was accused of bringing to light corrupt deals within the Tonse alliance administration.