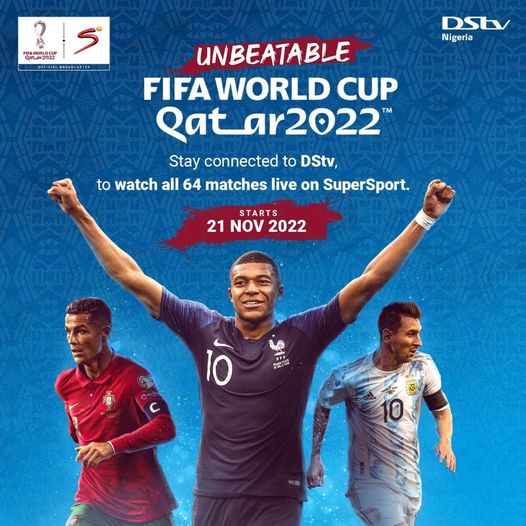 How does the 2022 FIFA World Cup affect next season’s Premier League schedule?

SuperSport viewers on DStv and GOtv will be counting down the days to the 2022 FIFA World Cup in Qatar, with the tournament set to run from 21 November to 18 December and provide the most thrilling distillation of ‘The Beautiful Game’.

Qatar 2022 will not only be the first-ever World Cup played in the Middle East, but also the first to be played in the Northern Hemisphere’s winter months of November and December (the tournament has always been held in the summer months of June and July in the past).

This means that major European leagues, such as the Premier League, La Liga and Serie A will have to be suspended while the 2022 FIFA World Cup is ongoing, bringing on major changes in their schedule for the 2022-23 season.

The 2022 World Cup begins on November 21st, with the Premier League set to be suspended roughly a week before. Matchday 16 will be the final round of fixtures before the break, with those games falling on the weekend of November 12th and 13th. Then, the call-up period will begin on Monday 14th November, where international managers select their squads.

The season will be adjusted slightly to accommodate the tournament, with the opening day now set to take place on the earlier date of August 6th.

The 2022 World Cup final will take place on Sunday 18th December 2022, and there won’t be much time for Premier League players to recover, as Boxing Day, December 26th, marks the resumption of the 2022-23 season.

Due to the aforementioned adjustment, the Premier League campaign will end later than usual on May 28th. Other leagues which run from August to May are expected to follow a similar schedule to the Premier League’s.

The UEFA Champions League, UEFA Europa League and UEFA Europa Conference League will also have adjusted schedules to accommodate the World Cup. The Champions League, for example, will  complete its qualifying rounds by the end of August, while the group stage will be crammed into the time from 6-7 September until 1-2 November.

The knockout phase of the competition will resume as usual in February 2023 after the World Cup has come and gone, but the final will only be held on 10 June 2023 (with the Conference League’s final on 7 June and the Europa League’s final on 31 May).

Don’t miss the New Football Season on SuperSport on DStv and GOtv. Access a world of choice and easily manage your subscription using the MyDStv and MyGOtv app, subscribe or upgrade, and join in on the excitement. And while you’re on the move, you can stream matches on the DStv App.