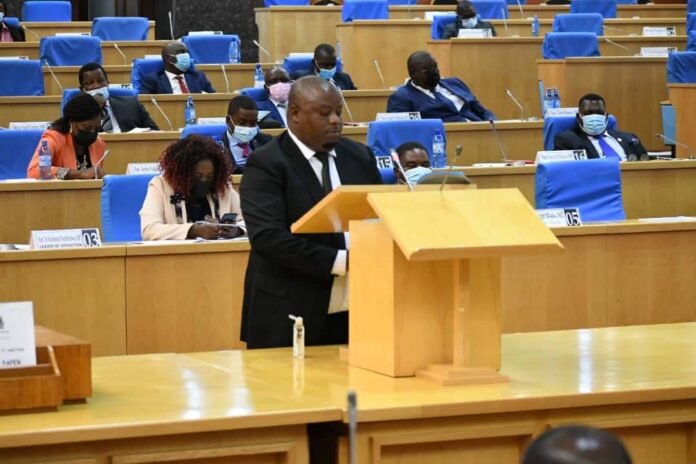 “Last week, I heard President Chakwera saying Malawi’s economy is doing fine, and that it is on the rise. Mr. President, you do not need to shout from a rooftop for people to come and see an economy, which is on the rise.

“An economy on the rise is self-evident,” said Nankhumwa when he presented his closing at the end of the 6th meeting of the 49th session of Parliament in Lilongwe on Friday

Nankhumwa said the opposition has talked persistently about macroeconomic fundamentals that are telling a sad story about our economy, observing that inflation is currently in the double digits and prices of basic goods continue to skyrocket. Additionally, the government continues to borrow too much domestically, he said.

“The austerity measures as announced by President Chakwera and the Secretary to the President and Cabinet have just crumbled before our own eyes because the addiction to spending is just too much starting from State House down to government ministries, departments and agencies (MDAs).

“Something is just so wrong about the management of our economy. I can go on and on to demonstrate that ours is not a profile of an economy on the mend,” he said.

Nankhumwa, who is also opposition Democratic Progressive Party (DPP) Vice President (South) said when economy is ticking, “the citizens can feel it in their houses, and in their pockets”.

“Madam Speaker, I am afraid; this is not the case with our economy right now. At the moment, the Malawi economy is in ICU, and to say that Malawi is rising against all these economic hardships is an insult to Malawians.

I, therefore, condemn the President’s statement in its entirety,” said the Leader of Opposition in Parliament, adding that the variables of the Malawi economy tell a different story “than the one being trumpeted”.

He said for example, the government announced recently that the number of Agricultural Inputs Programme (AIP) beneficiaries will be reduced by half this growing season. What this means is that the number of people that will be prone to hunger next year has increased, he said.

“As I am talking, this government does not have any idea of how to bring fertilizer into the country for AIP this year because of inadequate forex to pay for the product. What is even worse is that the little fertilizer that may be imported will be very expensive for Malawians to afford translating, again, to hunger next season.

“What this also means, Madam Speaker, is that despite all the pomp about AIP, the programme is not a feasible solution to this country’s food security challenges. I have always said that as a country, we need to graduate from relying on rain-fed agriculture and instead focus on serious irrigation farming.

“We have plenty of water in Lake Malawi, and plenty of other water bodies that are underutilized. I am of the opinion that this government is not doing enough on irrigation and that it is important that more effort and resources are invested in massive irrigation development to ensure long-term food security,” he advised.

The opposition leader said Malawians “are tired” of the non-stop blaming of Covid-19 and the war in Ukraine for our economic woes, urging the Tonse Alliance government to deliver for Malawians as promised during the campaign period.

“Malawians need practical solutions to their economic hardships. Malawians need rapid improvement in the quality of life and standard of living,” said Nankhumwa.