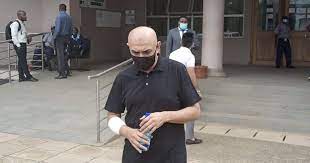 Batatawala told Zodiak Online that he was a victim of a probable dubious claim in which Mkandawire told him that he was to pay for a cargo consignment from Kenya of which the president Chakwera was aware of.

In a separate interview, Mkandawire admitted to have received the said money from Batatawala but was quick to claim that he took the money as loan some two years ago. He further wondered why businessman is coming out now.

He later promises to pay back.

Meanwhile, Batatawala’s lawyer Kuleza Richard Phokoso said the matter is before the High Court Commercial Division in Blantyre where his client is attempting to recoup the money with interest.

State House Chief of Staff, Prince Kapondamgaga, has since warned state house employees against using Chakwera’s name in reprehensible conduct which could put the state residences and the image of the state president in disrepute.