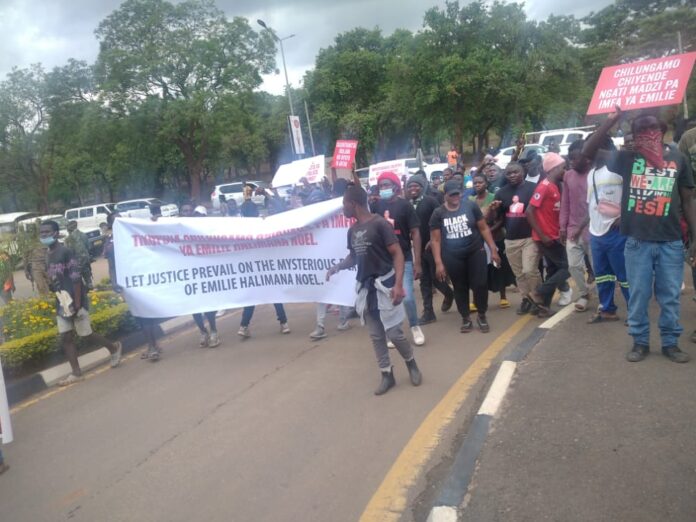 Hundreds match to parliament demanding justice on the death of Emmillie Halimana Noel who died mysteriously in what was initially believed to be a road accident but postmortem proved otherwise and Parliament has since been given seven days to summon police Chief Merline Yolamu.

The demonstrators led by Concerned Malawian Citizens in a company of Wales Khama, Cynthia Chikalema and Esther Kubwalo convened demonstrations after Lilongwe DC Lawford Palani succumbed to pressure from the grouping that opted to seek legal redress should the controlling officer continued with his tactics of persistent postponement of the peaceful demonstrations which was initially scheduled for November 23.

In the petition to parliament, the grouping has highlighted that Noel’s case is not the only one involving the mysterious death of a Malawian of Rwandan origin.

In a petition the grouping says it is now worrisome because such cases are always kept under wraps and they die a natural death without reaching logical conclusions.

For instance the grouping has outlined three cases of similar nature that occurred in the past.

“On December 12, 2015 in which a 32-year-old Jean Claude Gasana, another Lilongwe-based business person from Rwanda was killed at Discorium entertainment joint but till now nobody has been taken to task yet,

Further to that on July 10, 2017, unidentified gunmen shot dead another businessperson at Puma filling station in Salima before attempting on the life of another Malawian business person of Rwandan origin, Vincent Nyiongera who survived the attack albeit wounded,” reads the petition.

The Parliamentarians have also been notified that another Malawian of Rwandan origin Romeo Mukisa 30, who until his death was plying his trade in Area 25, on November 11, 2018 died in a mysterious accident at Wullian Shop close to Bwaila Hospital after the car he was travelling in allegedly plunged into a very shallow drainage on his way home from Rwandan Diaspora meeting that was held around Malangalanga in Lilongwe.

“Honourable members of the Assembly, you may wish to note that these are just a few cases out of the many cases that go neither unnoticed nor unreported like was the case at hand where the suspect, who was the driver for the deceased did not report the incident to police,” reads the petition.

Meanwhile Parliamentary Committee on security representative has promised to take the matter with keen interest it deserves.