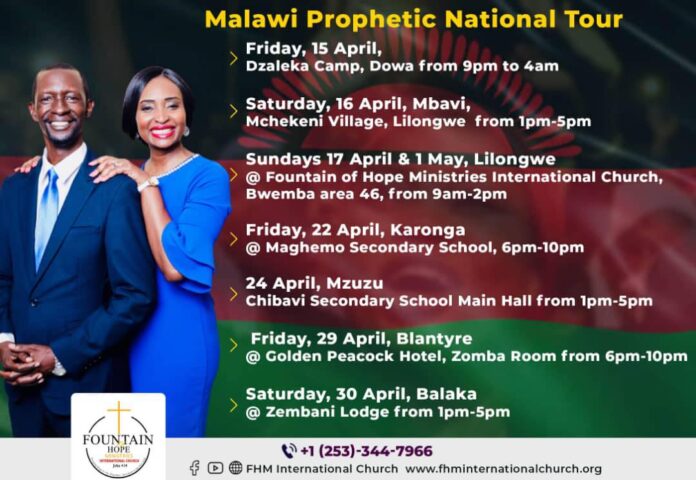 Fountain of Hope Ministries (FHM) International Church has lined up a number of activities for the Easter season under the banner Malawi National Prophetic Tour starting from Today, Friday the 15th of April.

FHM International Church which was founded by Prophet Vitu and Prophetess Dawa Kamanga announced the good tidings through a statement which was made available to the publication on Friday.

”At FHM International Church, we have planned month long Malawi National Prophetic Tour starting with a night of prayer on Friday, April 15th in Dzaleka Refugee Camp in Dowa from 9pm to 4am following an outdoor crusade at the Mbavi branch in Mchekeni village in Lilongwe near air wing on Saturday, April 16th from 1pm to 5pm,” reads the statement in part

According to FHM International Church, during this Easter weekend, the program ends on Sunday, April 17th at the Malawi church headquarters in Bwemba, area 46 in Lilongwe at the City of Hope and Refuge.

In the South, the Malawi National Tour will be concluded on Friday, April 29th at Golden Peacock Hotel, Zomba room in Blantyre from 6pm to 10pm then in Balaka at Zembani Lodge on Saturday, April 30th from 1pm to 5pm.

The tour concludes on 1st May, in Lilongwe at the Fountain of Hope Ministries International Church in Bwemba, area 46, from 9am-2pm.

“The objective of this mission is to reach out to all fellow Malawians by joining together in prayer during these hard times.

“We pray that healing, deliverance, restoration, miracles, signs and wonders will locate all according to the Lord’s promise in Mark 16:15 – 18 because we are faith founded through the power of Jesus Christ of Nazareth and that is His promise to those who believe,” said the statement

FHM International Church was founded in 2014 and it was based in Lilongwe for 5 years until the Lord released a word to plant a branch in Seattle, Washington in U.S.A in 2019.

Since then, it has 14 branches in 6 countries. With 6 branches in Malawi, 3 branches in United States of America and others in Zambia, Kenya, Benin and Zimbabwe.

All details for the Malawi National Prophetic Tour can be found on FHM International Church official Facebook page and website at www.fhminternationalchurch.org.