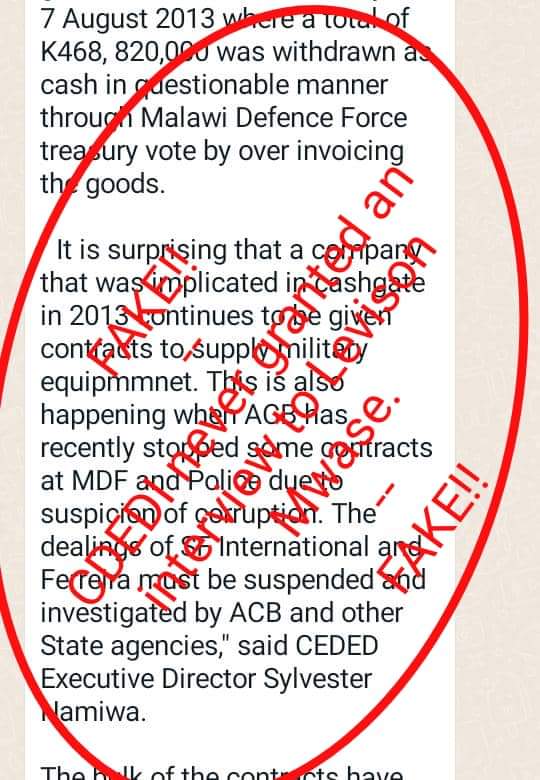 The Executive Director for Centre for Democracy and Economic Development Initiatives (CDEDI), Sylvester Namiwa, has denied having granted an interview to the press on SF International and MDF contract.

This follows an article making rounds on the social media under the headline SF International goes to bed with MDF’s General Nundwe, Police Brass amid eye brows’.

According to the fake article , Malawi Defence Force (MDF) and Police continues to award contract to SF International which is owned by Shiraz Fereirra to supply military equipment despite an order from Anti-Corruption Bureau (ACB) stopping the two security agencies from awarding contracts to companies.

The said fabricated article claimed that activist and government critic Namiwa has demanded an investigation into the deal.

“I did not grant an interview or any interviews over the said issue,” said Namiwa,

But this publication has learnt that the story was ‘cooked’ by MCP media team which is being led by one of the Directors in the Ministry Information which the aim dragging Namiwa into the mud as well as extorting money from the business sector.

Off the late, MCP media team has been writing false and fabricated stories targeting companies and President Lazarus Chakwera’s critics.

If that is not enough, this publication has also learnt that the so called author of the article Baxter Jere is a fake name; it doesn’t exist.