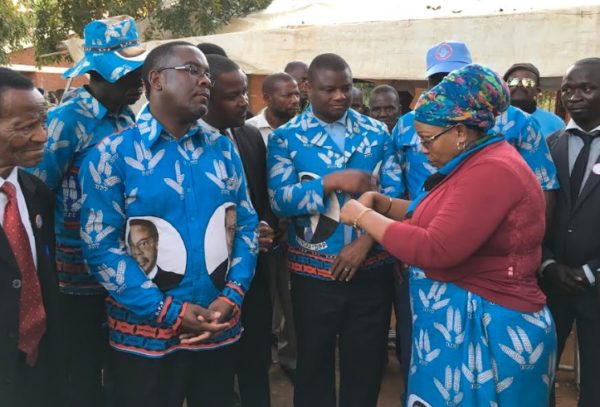 It seems trouble for once mighty blue party Democratic Progressive have reached another low level when its Organizing Secretary Chimwemwe Mazabuka Chipungu reacted unprofessionally on  the party’s WhatsApp group by calling other members unmentionable names for supporting Hon Samuel Tembenu’s views on the just gone by election where DPP fared badly.

The former Minister of Justice Tembenu spoke strongly about the need for the DPP leadership self-evaluation following the party’s continued political downward spiral.

“A party in crisis like ours is burying its head in the sand and hoping, foolishly I suppose, that its problems will go away or disappear just like that. Confront the problems and resolve them “

“There is a serious crisis that needs to be resolved. It’s a fallacy for a divided party to win an election. We have spoken about these things in private but nothing seems to work. We need decisive and resolute leadership now. As things are now, I agree, we are moving like a radar-less aeroplane. These things have to be said openly and without fear

Indeed the blue party is in a leadership crisis there is power struggle between Prof. Mutharika and Kondwani Nankhumwa who is also running his own DPP within DPP among others.

However many have called on to People like Chipungu who over and over again behaves wildly against some senior members of the party and he goes unpunished. Unfortunately, he is in the team of Mutharika and members believe his behavior has his blessing.

It is people like Chipungu who are misleading APM and this is the same when he was advised against Chisale who destroyed the party and lost elections in 2020.

Then Mutharika was meant to believe that people are complaining out of jealousy and envy.

Unfortunately for the blue party, Nankhumwa is using blind spot for APM to amass sympathy and support from some members who eventually feels it is  better to have him as leader than have the Chimwemwe chipungu’s ruining the show.

DPP has its members intact and royal to APM, however everyone is waiting for the day APM stands up and discipline such people and have the party once again united.

In my view I don’t think Nankhumwa if called to the table will reject what Mutharika offers, but its people like Chipungu who are ruining the relationship between APM and members of the Party.

Even if the court case that is currently going on which Tembenu is one of the lawyers goes in favor of DPP and status co remains the same DPP will lose that election miserably.