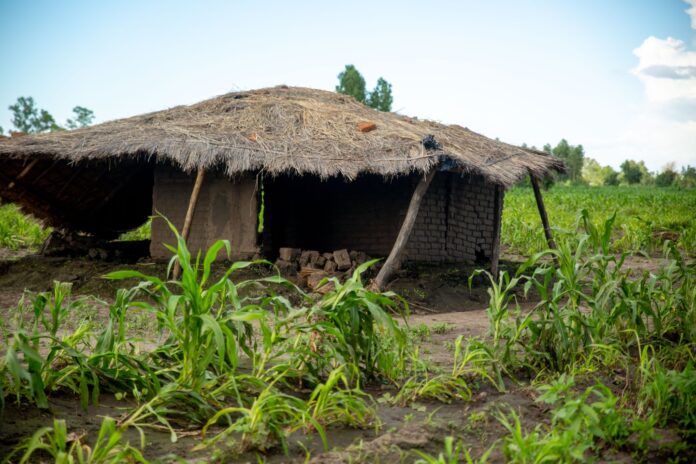 Living in agonic situations, empty stomach, fear for sexual exploitation and helpless on their shelter is a true reflection of how life is deemed when ever natural disasters such as floods landfall in most districts in the country.

For many decades most parts especially in the lower shire districts such as Nsanje and Chikwawa have fallen victims of Cyclones (Idai and Ana) which have devastated most families living others displaced and losing their lives in the course.

“It was Sunday, 23rd January 2022 when rains begun continuously to Monday, 24th and it was on this day’s evening whilst taking supper with my family, when I heard people running and wailing that flood are coming of which I immediately carried my baby and run for our dear lives to this evacuation center.” Agness Gwembere narrates her story.

According to Gwembere while comparing with the past rains, life has not been easy to survive in such scenarios as they can not reconstruct their houses with relentless floods.

“I came to this evacuation center with hope to be assisted as am waiting for the weather to settle down so I can reconstruct my house and am thankful that the center has been safe harbor for the fact that we are being provided with food and a safe place to sleep as this facility was constructed systematically to constrain water from debilitating it, hence our security is very quiet assured here.”

Gwembere then contrasted with experiences from previous years when people used to evacuate to nearby Milema Catholic primary schools where sexual exploitation issues were also intense due to inadequate space to accommodate many people as she cited the UNDP Malawi evacuation center has enough space to accommodate both genders to be sleeping on different rooms.

“This center is also playing a pivotal role in this community as a venue to host different types of events including weddings since it has its large rooms with beautiful yard, while previously we used open space for public gatherings”-She said

“Just like previous years, the Tropical Storm Ana has again affected my subjects with some losing their household belongings as several houses have been washed away with heavy rains, however the situation is not intense unlike the previous years, thanks to UNDP Malawi through their disaster inclusive recovery project which has constructed houses for some of my people and have played a huge role this year as many people have also been accommodated in these houses.” Lamented Chinthali

Malita Kwenzalamba aged 79 runs a small tomato business at the market who said  the new market facility has helped to stabilize business operations.

“After this new facility was constructed at this market for us, we are able to do our business steadily, since the structure is strong and well covered to prevent rains and scorching sun from tampering with our operations, for this we are very grateful, and I would also like to ask if they can construct another to accommodate more vendors.” she said

According to Nyirenda under Inclusive Recovery Project and the Promoting Sustainable Partnerships for Empowered Resilience (PROSPER) programme the Organisation works in advancing government agendas to up safety of people in disaster prone areas.

“Appreciating the fact that floods continue to pose serious threats to life and property across the country, we have been partnering Malawi government to help build capacity of key actors to improve weather and climate information, early warnings to disaster-prone communities to save lives and safeguard livelihoods.

“the initiative is generating important analyses for planning and real-time incident reporting during disasters which helps in ensuring timely response to affected populations and to promote resilience.” Said Nyirenda

UNDP Malawi has constructed a total of 10 Evacuation Centres over the years, capacitated to accommodate more than 300 people in flood prone areas and plans to construct  200 weather and flood resilient houses in  affected communities in Zomba and Phalombe districts.

President Lazarus Chakwera declared a State of National Disaster on 26th January 2022 and appealed for support from donors, partners including UN Agencies, Nongovernmental organizations and well-wishers towards people affected by tropical storm Ana.