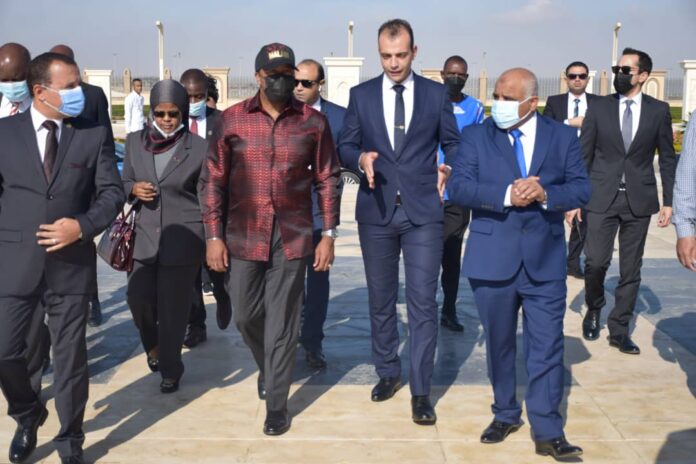 Vice President Saulos Chilima on Wednesday left Egypt for Malawi where he represented the President Lazarus Chakwera at the 21st COMESA Heads of Government and State Summit.

At the Summit, Chilima rallied the delegates to fully embrace e-commerce and digitilization as a way of life for the regional bloc.

Before he headed home, the Vice President was on Wednesday invited by the Egyptian government to tour their new Administrative Capital which is currently under construction.

“I was both awestruck and motivated to see what our friends are doing. To imagine that they are creating a new city from the scratch is something that we must all embrace and believe that we too can,” the Vice President wrote on his Facebook page.

Chilima said with a unity of purpose, dedication and the ability to always think about the next generation Malawi too can do great things.

Further writing on his Facebook and Twitter pages, Chilima said he later, together with government officials from Foreign Affairs and Ministry of Trade, held a meeting Infinity Energy – investors who reaffirmed their interest to invest Solar and Wind powered energy in Malawi with a total capacity of 1000 Megawatts.

“During the Meeting, the company highlighted some key potential social economic benefits that the country will realise from the project by citing their immense contribution to the Egyptian Economy using similar projects. Such benefits include stimulation of both domestic and FDI creation,” he wrote.

He said they assured the Investors of full Government support to ensure that all necessary steps are followed in line with Malawi’s legal framework so that such an important investment becomes a reality.

His last engagement of the day was with Malawian students studying in Egypt who requested for a meeting to see him as well as to raise issues that as a government we must look into.

“The issues include delays or failure to renew passports, how best to be served by the Embassy as well as general upkeep issues. I have assured the students that I will engage the relevant authorities to look into their concerns especially on Passport renewals being an urgent matter,” he said.

Before Egypt, the Vice President also represented President Chakwera at the Dubai 2020 expo.