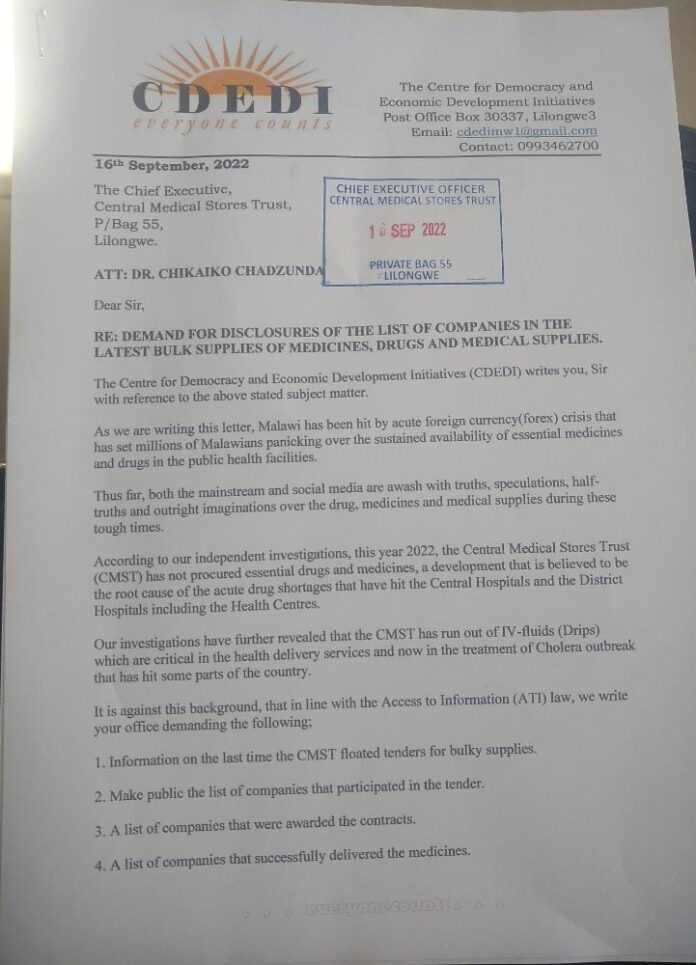 In a letter addressed to CMST Chief Executive, Dr Chikaiko Chadzunda, CDEDI wants the organization in question to make it clear on its stand so as to put right what is in public domain.

In the interest of transparency and accountability, CDEDI has since challenged the trust to seize the opportunity to inform Malawians on the state of the medical supplies in public health facilities and how it intends to maintain the supply chain in the face of the forex crisis.

“We are looking forward to hearing from you Sir, within the next seven (7) days,” reads the letter signed by CDEDI Executive Director Sylvester Namiwa.

He said his organisation has reached this extent after an independent investigations, recently revealed that the CMST has not procured essential drugs and medicines, a development that is believed to be the root cause of the acute drug shortages that have hit both referral and the District Hospitals not to mention of Health Centres.

Namiwa don’t discloses that it is within the investigations where it was further revealed that the CMST has run out of IV-fluids (Drips) which are critical in the health delivery services and now in the treatment of Cholera outbreak that has hit some parts of the country.

“It is against this background, that in line with the Access to Information (ATI) law, we write your office demanding records on the last time the CMST floated tenders for bulky supplies,” says Namiwa.

Malawi has been hit by acute foreign currency(forex) crisis that has set millions of its citizens panicking over the unsustained availability of essential medicines and drugs in the public health facilities.

Currently both the mainstream and social media are awash with truths, speculations, half-truths and outright imaginations over the drug, medicines and medical supplies during these tough times.

CMST is yet to confirm receipt of the letter. The organisation has recently been in the limelight due to its negligence when handling procurement processes. It recently disposed expired medicine when at the time before expiry more health facilities were reportedly lacking a number of essential drugs that were enlisted on the disposed roll.